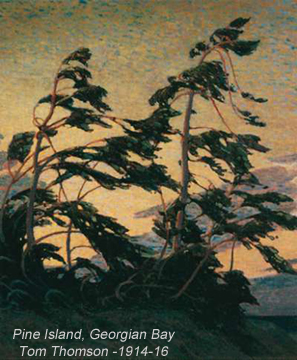 Tom Thomson was an influential Canadian artist of the early 20th century. He directly influenced a group of Canadian painters that would come to be known as the Group of Seven, and though he died before they formally formed, he is sometimes incorrectly credited as being a member of the group itself. Thomson died under mysterious circumstances, which added to his mystique. He disappeared during a canoeing trip in Algonquin Park on July 8, 1917 and his body was discovered in the lake eight days later. The official cause of death was accidental drowning, but he was found with fishing line wrapped around his leg and he had a head injury There are still questions about how he actually died.

Email ThisBlogThis!Share to TwitterShare to FacebookShare to Pinterest
Labels: haiku my heart

I appreciate every comment! I can't respond to every comment, but I will return the favour and visit your blog.

This is a word verification free blog!

With very few exceptions, I don't visit blogs that have word verification

Who writes this stuff?

Karen
Canada
I live life to the fullest, in my many roles as...wife, mom, gramma, and friend. In my spare time, I write poetry, I take photographs, I play my harp...

My other blog, Pixel Posts

© Copyrighted Material under the Federal Copyright Act of Canada. All poetry, prose, and photos (Pixel Posts) presented on this blog are my original works, unless otherwise indicated.